Dreams can come true if you try 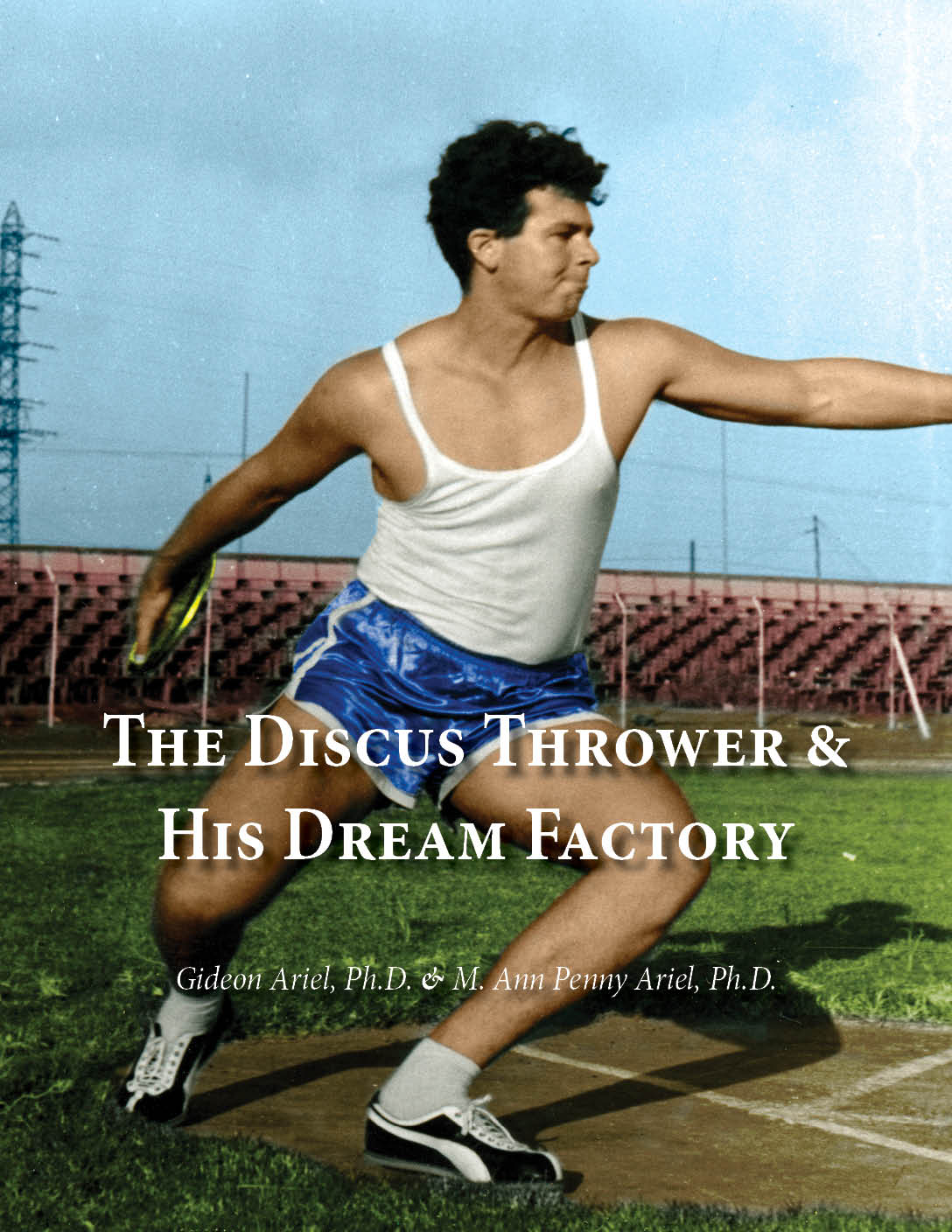 If you want to run faster, jump higher or hit it longer, call on this electronic mastermind.

Every golfer has an optimum capability. Gideon Ariel shows you how to obtain yours.

Anything you can do, this sports scientist will help you do better

The body is a machine like any other. Analyze its performance on a computer and startling things happen.

Everybody can be a gold medalist in his own body, with the help of computers.

When you analyze athletics scientifically, you see that it is possible for many of the best athletes to do even better.

The computer brings to resistive exercise a broad new realm of possibilities for applications in bodybuilding, athletics, general fitness training and rehabilitation.

Download the complete book in PDF-format for offline reading.

As a child in Israel, Dr. Gideon Ariel had five goals—breaking the Israeli records in the shot put and discus, representing Israel in the Olympic Games, studying at a university in America, becoming a multimillionaire and owning a Cadillac. These goals might have seemed unobtainable to a young man on his way to juvenile delinquency, but picking up the discus changed all that. And one sailing, floating throw in a single competitive event set him on a path to becoming a world-renowned biomechanist and operating his own dream factory.

Following Ariel from his birth in Tel Aviv in 1939 to a kibbutz where he met the people that would change his life, The Discus Thrower & His Dream Factory describes the journey in great detail. Once a troubled youth, his love of shot put and discus improved not only his physical performance but his emotional performance as well. He gained confidence and dared to dream. And when the Olympics came calling, Ariel was ready to answer. Not only a fascinating life story, The Discus Thrower & His Dream Factory teaches an important lesson to our children. Dreams have no boundaries if you follow them. Imagination, luck, and hard work are necessary ingredients for success.

If your mind bubbles, creates, and breathes life into dreams, then dreams can become real. The mind is the factory, which forges the dreams.

Dr. Gideon Ariel is a world-renowned authority in biomechanics, the science linking physics to movement of the human body, with special expertise in computer science. He is an Israeli former Olympic track and field athlete, competing in the shot put and discus throw. He completed his graduate and post-doctoral work at the University of Massachusetts, where he received a Ph.D. in Biomechanics and Computer Science.

Dr. Ariel has published numerous scientific papers, has been featured on national TV and in many magazines, and holds several patents, including one on variable resistance which is the basis of most modern exercise equipment. He served as consultant to many of the country's leading companies, founded an independent laboratory devoted to biomechanical research relating to human performance, and was chairman of the U.S. Olympic Biomechanical Committee.

Dr. Ariel has been active in the fields of exercise and movement quantification for over 50 years. He conducted the first scientific study of anabolic steroids, invented the first rapid and accurate computerized system to quantify the movement of Olympic athletes using the Newtonian laws of motion, invented the air shoe, and invented an exercise system that was actually controlled, not merely monitored, by a computer.

My journey as a discus thrower to an Olympic Gold Medal, Silver Medal and Four World's Records went through the "House of Gideon". There have been many people who provided me help in my efforts to pursue my dreams. Their achievements and personalities were far beyond my modest athletic success. Some could actually be called genius.

It was my huge fortune to meet Gideon Ariel, a man I call a genius. His help was invaluable to me.

Gideon is the "Father of Biomechanical Analysis" in the world of sport science. As an athlete in a technical event, of course I sought the opinion and data of Gideon Ariel.

Gideon was a scientist, engineer, businessman and athlete, an "Israeli Renaissance Man". He was a two time Olympian for Israel as a discus thrower and it was this part of his life that helped us connect when we first met.

Over the years our friendship has grown far beyond analyzing the best way to throw the discus. When you read this book you can get a sense of the breadth of his imagination and dreams. I have been fortunate to have this genius discus thrower as a friend.

As Gideon passed my booth at the US Track Coaches meetings in Eugene, Oregon 1973, he said to his followers, “that hydraulic system provides the resistance appropriate through a range of motion”.

We reintroduced ourselves, both having competed as Olympians in Tokyo, 1964 and found that we shared the passion to improve performances based upon “sport specificity”. He had just completed his PHD in computerized analysis of athletic movement.

I had the honor of introducing him to the USOC hierarchy and working with him in establishing those concepts. Since then, he has been the one individual who has most influenced Olympians in their quest for improvement and the quest for Olympic gold.

His book is an inspiration and an explantation. Kudos Gideon...! The Gold medal is yours!

I have known Dr. Gideon Ariel for over six decades. He was a most dedicated athlete representing Israel it two Olympic Games, excellent student, a scholar and a distinguished world renowned scientist. Dr. Ariel was able to combine his vast knowledge and love for sport with brilliant mastery of computer science. In order to innovate and advance our understanding of motion in general and sport performance in particular. In my capacity as the Olympic commentator in the last twelve Olympic Games for Israeli Television, I most often used Dr. Ariel's articulated computerized systems in my analyses to reveal the beauty and grace of elite sport performances and share Those with my audience. I do want to use this opportunity to thank Dr. Ariel for his immense contribution to the world of sport science!

Gideon Ariel's autobiography is a MUST-READ for anyone interested in Sports Science and Biomechanics. His story follows the ascension of an aspiring young athlete on the streets of Tel Aviv to an Olympian. His dreams of athletic perfection lead to the creation of technologies that changed the world of Sports Science forever. To this day Gideons' inventions continue to help thousands of Olympians, Professionals and Amateur athletes, worldwide, to realize their dreams! Congratulations Gideon Ariel on a lifetime of personal and professional achievement!

Gideon Ariel is an unrivalled creative mind in the world of sports science. From head to toe he has affected athletes everywhere. Athlete's brains are affected by the information gleaned from his computerised biofeedback inventions such as the APAS software. Athletes bodies are optimally trained through his programmable resistance mechanisms such as the ACES machine. Athletes feet are cushioned by air soles that Dr. Ariel patented. No one in history has matched the cumulative positive effects on athleticism as Gideon Ariel.

I have known Dr. Gideon for more than ten years as one of the original baseball facilities to use his ACES fast twitch equipment. He has been a fountain of information for training elite athletes. He was a pioneer in resistance training as well as biomechanical breakdowns of every sports movement so that athletes could train more specifically and develop power. His resume is unparalleled and because if his equipment, training, and guidance my facility has produced athletes that have made into every level of pro baseball and many more that have received College Scholarships. What a wealth of knowledge he is.