When I reflect on my life, I think it has been all about inspiration, amazing dedication and effort, and the luck necessary to achieve my many successes. Not only that which inspired me, but what I witnessed and shared with the thousands of Olympic athletes and other dedicated athletes with whom I had the privilege to work. I have also included the pleasure of sharing in the efforts and achievements of many brilliant athletes and coaches in Track and Field, Discus, Tennis, Golf, Weight Lifting, Swimming and other sports. We all had in common a desire to achieve our “personal best,” whatever it was, and, for the most part, we were successful.

As a scrawny boy, I lacked self-confidence and suffered physical and mental abuse in my early childhood. But my heroes were the great athletes who graced my walls of my bedroom and unknowingly set the course for me. What, I endlessly wondered, did my heroes do to develop and achieve their dreams? Their performances motivated me to try.

I was also inspired by my friends, the children who surrounded me, most of them orphaned and traumatized in the Holocaust. These young people had possessed the strength of character to persevere in the face of unspeakable horrors. Then, they were brought to Hadassim and, afterwards, went on to become leaders in parliament, great artists, successful business people, and intellectuals. I sensed that such character was built on work and effort, but also on an unswerving belief in humanity and courage.

On the positive side, I was inspired by teachers who showed their belief in me and who taught me, by example, the amazing power of kindness and wisdom. Words of encouragement were not wasted. It took very little praise or suggestions to evoke my total dedication to a task.

I was inspired by my father’s conviction that I would not amount to anything. I knew that I was not the boy my father wanted me to be. Most of the time, I did not even know what that boy was supposed to do. But I was confident that I could do well, would be successful, and make my father proud of me.

I wanted to live a life of meaning after watching my fellow Olympian athletes murdered in Munich. Although these deaths weighed on my heart, their bravery and courage greatly elevated me. I hoped that my accomplishments would be meaningful.

Then, as I grew in size and knowledge, I was intellectually captivated and stimulated by sciences, biomechanics, and engineering. Armed with knowledge, I was inspired to help people train their own bodies in the most efficient ways possible. This desire for improvement inspired me to create the advanced personalized computer programs and quantitative systems that showed exactly how each body part could move to its individual maximum efficiency.

Using as many as nine high-speed cameras, I created a system that automatically digitizes and captures the movement of different joint centers into 3 dimensional figures on a screen. More recently, the Avatar movie used this technology. The most amazing feature of this computerized system was that it was based on and utilized Newtonian equations. Thus, understanding and performance modifications were based on science and not merely on visual observations. This was revolutionary for sports training because now, using these screen images and mathematically calculated tables based on Newtonian physics, athletes could understand where they needed to realign their movements to become the winners they trained to become. The days when the coach looked at the results – how far away the shot landed or whether the arrow hit the target -- was replaced by quantification of the performance.

One of the athletes I admired and worked with was the discus thrower, Mac Wilkins. It was with great pride I recently received the following message from him. Mac and I had analyzed his throwing motion for few years, prior to the Montreal Olympics of 1976. He went on to set the World record and win the Gold medal in those games. He was kind enough to thank me for my assistance in 1976 and I was pleased to discover in 2011 this e-mail acknowledge from him:

The Wilkins Review is an outlet for my ideas and concepts about the throws.

Some of them are based on conversations we had 35 years ago.

Just one way to monetize the intellectual capital.

Thanks for your generous offers.

I hope to take you up on them sometime in the next few months.

Our outdoor season starts next week and things get busy! 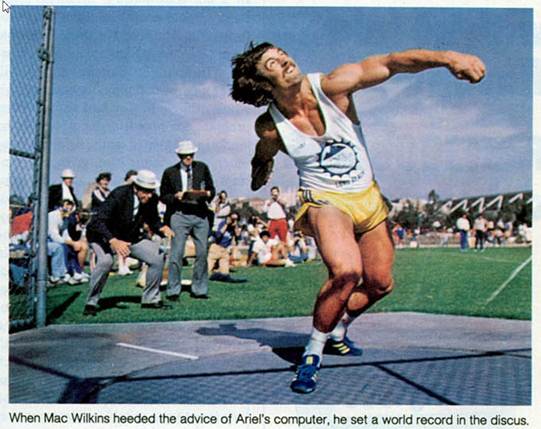 Because of the joy of helping many of the dedicated athletes with whom I worked in the early 1970s, I was inspired to donate these same biomechanical technologies as well as my personal time to the US Olympic committee training center in, first Squaw Valley, California and then Colorado Springs. My computerized programs were donated and implemented along with many generous equipment donations which I urged American companies to make to help American athletes. I felt compelled to make my technologies available to every athlete round the world. This science resulted in many athletes achieving coveted gold, silver, and bronze medals.

I was motivated to design computerized exercise machines so that all people could now intelligently train and develop their bodies. Perhaps, since my father always thought that I was a loser who would never amount to very much; it was natural for me to believe that each individual can achieve a “gold medal” in their own body. One of my goals, then, was to create an invention for the great and not so great athletes. In many ways, the computerized exercise system was the technologically improved design that I had utilized as a child by adding chains to my cement-filled fruit can barbells. With computers, the equipment could produce so many more choices of exercise as well as changing the velocity or resistance that the person had to lift. It was an excellent enhancement for athletic performance and it was incredibly exciting to watch the athletes improve their performances on the field and in the gym.

Not only do athletes need to improve the physical and muscular component of their sport, they also need equipment. I designed many different shoes for runners and other athletic events. My motivation was to assist the participant in their sport to run or execute the required skill at full efficiency. Some of the sporting areas in which I worked to improve the “tools” included tennis, softball, basketball, skiing, and bicycle racing. In short, I endeavored to make a mark on how we can work with our bodies so they can move in ways not thought possible and to provide enhanced equipment for them to employ. My reward was watching the happiness people experienced when they surpassed limitations that they never thought they could.

While dreams and inspiration guided me and raised my hopes to elevated levels, it was my dedication, focus, and hard work that produced my many successes. It is easy to have a dream, but it takes tremendous effort to realize it. Surely, I would have been the loser my father and elementary school teacher believed I was if I had not persevered through tremendous adversity and effort to achieve my dreams. I never gave up or quit on anything I tried to accomplish. Regardless of the time and effort necessary, I was and continue to be relentless. There is an expression “the only place where success comes before work is in the dictionary.” This attitude and effort, I believe, is the reason for my achieving my inspired dreams.

Along the way, I met many, many characters and frequently learned the meaning of values. All were good people in many ways. Some were misguided and ultimately destroyed their own business. Many of my ideas and creations produced some insane lawsuits, including with exercise gurus toting guns. I have learned to try to avoid lawyers and over-inflated business promises. I have clung to my values of dedication, work, generosity, and the incredible power and joy of dreams. I like to believe that good prevails.

I have been a little over-inspired by some beautiful women. Most importantly, I have been deeply inspired by the loving devotion of one woman who has been my lifelong love and business partner. I could go on and I am about to!

Let me tell you the story of how someone with drive, ambition, a strong work ethic, determination, focus and a vision can live a life that is more than exciting. There was some terrible pain here and there, but never boredom. My life has been a wild ride filled with visions and dedication, work and complication, and lots of happiness. I will show you where my dreams took me and everyone else I touched.